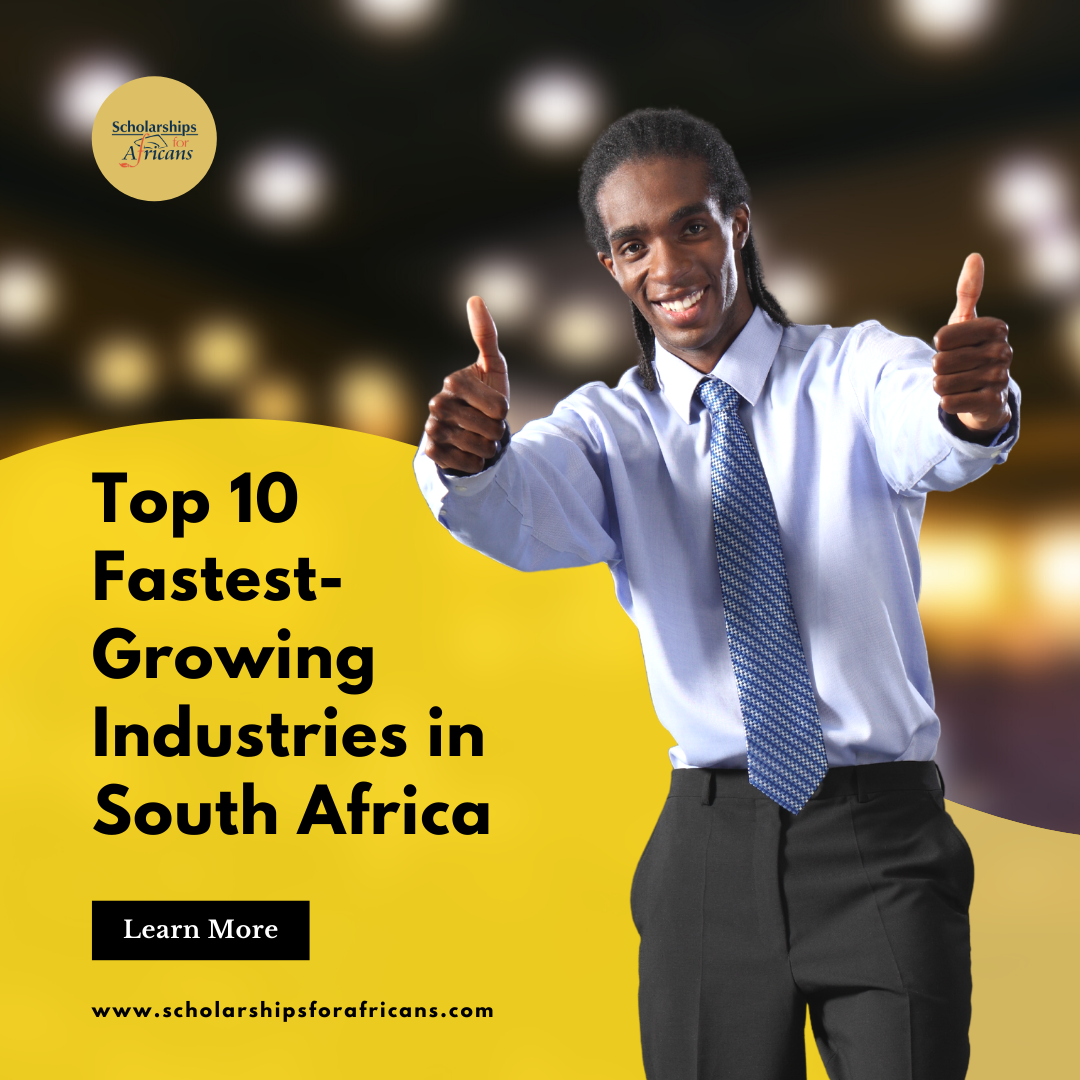 Haven’t decided on a college major yet? If you’re a South African who would like to know what career opportunities will skyrocket in your home country over the next few years, then take a look at this compilation of fastest-growing industries in South Africa!

The fastest-growing industries in South Africa are largely tied to various business sectors. These economic factors contribute heavily to the forecasted 4% GDP growth for 2021, according to GlobalData.

As South Africa’s economy developed throughout the early 1990s, there was a significant shift from mining and agriculture to other industries such as wholesale and retail commerce, tourism, and communications.

South Africa has started transitioning from a traditional economy to a knowledge-based economy, in which digital technology, e-commerce, banking, and other services will play an increasingly prominent role in the years to come.

What are the fastest-growing industries in South Africa?

With no reliance on a single industry for revenue, the nation is progressively becoming self-sufficient. The growing middle-class coupled with political stability contribute heavily towards driving Mzansi’s economic growth.

The fastest-growing industries in South Africa include:

If you’re still unsure about what college major to choose, consider the following compiled for you to consider.

The South African Reserve Bank (SARB) is responsible for the banking services sector while the Financial Services Board (FSB) supervises the financial services non-banking sector. Due to the recent changes in the financial sector, South Africa has seen a large influx of international banks and financial institutions.

| CHECK OUT: University of Central Lancashire Scholarships for South Africans

South Africa serves as a regional hub and a supplier of information and communication technology (ICT) goods and services to neighboring nations. Multinational ICT corporations such as Systems Application Protocol (SAP), IBM, Microsoft, Dell, Intel, Unisys, Novell, and Compaq have subsidiaries in Mzansi.

South African Airways (SAA), the government-owned national airline carrier, on the other hand, offers air transportation and shipping services to over 700 locations worldwide.

Despite the fact that SAA and Transnet dominate the industry, there are many international and local logistics businesses in South Africa. In addition, the market is still in the process of absorbing all other available and interested investors.

Africa is home to 30% of the world’s natural reserves, with South Africa accounting for the lion’s share of that figure. Besides being the world’s biggest producer of platinum and gold, the nation is also recognized as the world’s fourth-largest producer of diamonds, and home to the highest-grade quality base metals and coal.

Because the world’s leading automakers are moving to creating electric cars, worldwide demand for battery metals (copper, cobalt, vanadium, lithium, nickel, lead, and graphite) is expected to increase. Some of the metals are abundant in South Africa.

Menar Holdings, a private investment company with an actively managed and growing portfolio of mining assets, intends to produce 30,000 tonnes per month of manganese from its new mine in the Northern Cape. Furthermore, this mining firm expects to generate R7 billion by 2022 from its two big coal operations in Mpumalanga, and the coal industry forecast remains positive.

Agriculture is a significant contributor to South Africa’s gross domestic product (GDP) because of the rapidly increasing population, which drives up the need for food. According to Statistics South Africa (StatsSA), agriculture was the only sector that saw positive growth in the fourth quarter of 2020 when compared to the previous quarter’s performance.

Diseases like HIV/AIDS, tuberculosis, diabetes, cardiovascular disease, hypertension, and cancer are all on the rise. The nation has Sub-Saharan Africa’s biggest pharmaceutical market. The prescription medicines industry is estimated to be worth $3 billion, while the innovator/patented medications market is estimated to be worth $1.7 billion. Meanwhile, over-the-counter medications are valued at $378 million.

If the government’s National Health Insurance plan is implemented, there will be an increase in demand for generic prescription medicines and better healthcare infrastructure. By increasing the number of pharmaceutical firms that produce generic medicines, these companies will likely see an increase in investment in the nation since 85 percent of South Africa’s population relies on public health. It’s safe to assume that the public would gladly sign up for the National Health Insurance Plan to get cheap generic medicines.

The insurance industry in South Africa is thriving. In comparison to five years ago, more residents are purchasing insurance policies because they have become more educated about the advantages of protecting their possessions and lives. According to the Oxford Business Group, the short-term insurance industry alone is worth $6 billion.

These insurance plans are appealing to low-income workers and adolescents, who make up the majority of SA’s population. According to the South Africa Insurance Association (SAIA), 35 percent of vehicles in the nation are insured for less than a year. For the benefit of both the policyholders and insurers in the long run, insurance companies should look into investing in technology to improve transparency.

South Africa is experiencing a property and housing scarcity as a result of its expanding population due to high birth rates and increased immigration rates from neighboring nations. The property cycle is particularly remarkable since graduates often rent modest flats when they begin their careers. Subsequently, they tend to purchase the rental flats and sell them when they can afford to buy townhouses or construct houses.

South Africa is a popular tourist destination, therefore there is a strong demand for vacation houses, resorts, and hotels, as well as offices for companies. All of these reasons demonstrate that South Africa is the ideal location to establish a real estate or construction firm. Furthermore, policies such as tax incentives for rehabilitation projects and the elimination of stamp duty and VAT on property acquisitions benefit the sector.

In 2019, the vehicle and automotive industry contributed 6.4 percent of South Africa’s GDP—including the manufacturing, distribution, service, and maintenance of motor vehicles and components. If you’re interested in establishing an automotive import company, then consider doing business with German, US, and Japanese vehicles.

In 2019, the total value of automobile commerce between Germany and South Africa was $9.53 billion. Signing distributor/agent agreements with international companies allows South African specialty equipment and accessory wholesalers and retailers to extend their product range.

South Africa’s fashion and beauty business is overlooked by many. The cosmetics industry generates R25 billion in retail sales and over R5 billion in manufacturing sales. In addition to the large international corporations, a mix of smaller local brands, some of which are the brainchild of entrepreneurs, can be found in the sector. For a long time, pioneers in this field kept its secrets hidden—this may be the high time to properly give light to this underappreciated industry.

The recent wake-up call among South Africans has resulted in a huge blossoming of fashion and beauty YouTube channels, social media influencers, and more. It is the most cost-effective industry to invest in, particularly if you concentrate on selling cosmetics made from natural components.

If you are a wise investor, you may make a fortune in South Africa’s fastest expanding industries. When you have the opportunity to invest, do not pass it up. Begin your path to achievement by saving money or requesting financial assistance from financial institutions.

Manszi is only going to grow and expand from here on out.

The Lacuna Fund for Data Scientists, Researchers, and Social Entrepreneurs