Nov 11, 2021 Opportunities for Ethiopians, study in Africa, study in ethiopia 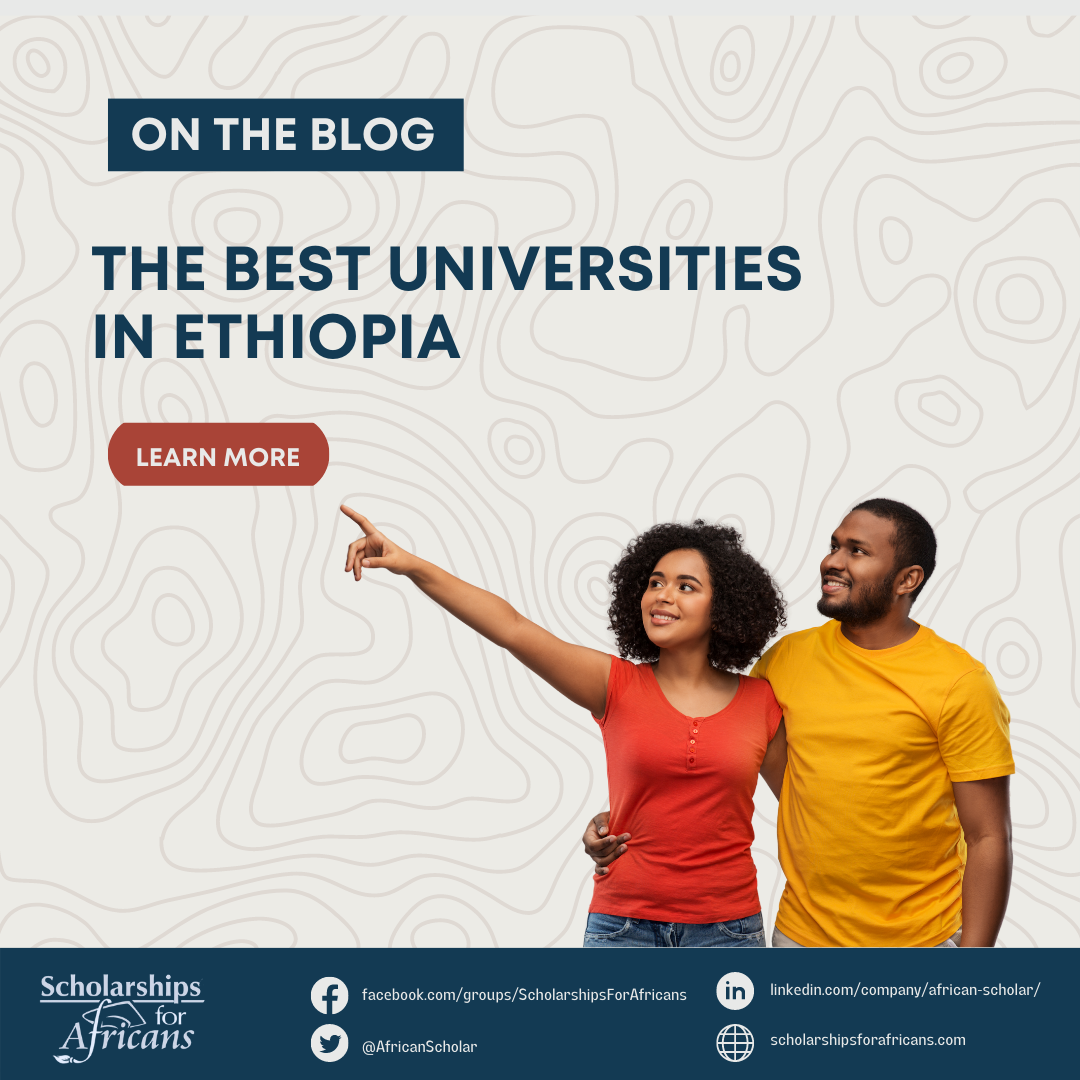 Ethiopia is the second-most populated African country and one of the world’s oldest. Ethiopia is home to some of the earliest signs of human life, which is why many people visit there to learn about humanity’s past.

If you want to study in Ethiopia, then you need to know which of its universities are right for you. Students interested in studying in Ethiopia can pursue practically any topic of study, including arts & culture, archaeology, health sciences, and research.

Below are the Top 10 Best Universities in Ethiopia from EduRank that you should look out for.

Addis Ababa Institution, located in Ethiopia, was founded in 1950, making it the country’s oldest university.

Furthermore, the university is affiliated with various research institutions, including the Institute of Ethiopian Studies. Moreover, students can visit one of 13 different campuses. Twelve of these are in Addis Abeba, and one is around 45 kilometers distant in Bishoftu.

The main university library (John F. Kennedy Memorial Library) is located on campus (at Sidist Kilo), and it houses a large collection of study materials for students. There is also a sports facility with playing fields and courts for students who are interested in sports. There are also several clubs to join and yearly tournaments in which students can represent the institution.

The institution has developed links with universities all over the globe, participating in numerous exchange activities such as academic exchanges, scientific research collaboration, and the possibility for students to study abroad. The institution extends a warm welcome to its students.

In the 1980s, Jimma University was formed by the merger of the Jimma Institute of Health Science and the Jimma College of Agriculture. Both institutions were national leaders in their respective professions, and the merger allowed for the formation of a new, diversified, and development-oriented institution from the two former speciality institutions.

Throughout the 1990s, Ethiopians were resolved to tackle the country’s severe development obstacles.

Such difficulties were encountered in all sections of society and in all places. Given this fact, new institutions needed to be created in a way that would benefit the nation’s growth. A well-conceived and adaptable higher education institutional development strategy was required for the country’s overall growth.

Across the country, several new higher education institutions were established, while old schools were improved and extended. Jimma University, more than any other institution of higher learning in the country, exemplifies this development and upgrading of programs.

Jimma University is regularly named the best public university in the country, and this is due to the high quality of each academic program.

Mekelle University (MU) is located in the town of Mekelle in the Tigray region of Northern Ethiopia, 783 kilometers from Ethiopia’s capital.

The merging of two former institutions, Mekelle Business College and Mekelle University College, formed the University in May 2000 as an autonomous higher education institution by the Government of Ethiopia.

MU is well-known for its significant research efforts in the fields of Dryland Agriculture and Natural Resources. In Ethiopia, the drylands (including arid, semi-arid, and sub-humid regions) account for around 70% of total land mass and 46% of total arable land.

Hawassa University was founded in April 2000 in Hawassa. The university was created by the merger of three southern Ethiopian colleges: Awassa College of Agriculture, Wondogenet College of Forestry, and Dilla College of Teacher Education and Health Sciences.

Since then, the university has expanded its capacities by establishing additional schools, institutes and departments, programs, and research facilities. Hawassa University is now engaged in expansion efforts in order to improve its intake capacity.

As part of this, the University received 61 hectares of property from the Yirgalem Town Administration and has begun construction of structures to expand existing programs and introduce new ones.

Hawassa University is now a comprehensive university that provides all-round education, research, training, and community service through its many academic departments.

The Bahir Dar Polytechnic Institute, which has now evolved into Technology and Textile institutes, was founded in 1963 as a result of technical collaboration between the Government of the Soviet Union and the Imperial Government of Ethiopia. The institute was a national leader in the production of technicians.

The Bahir Dar Teachers’ College, formerly known as the Academy of Pedagogy, was founded in 1972 by a tripartite agreement between the Imperial Government of Ethiopia, UNESCO, and UNDP, and began operations the following year under the auspices of the Ministry of Education and Fine Arts.

In 1954, the Imperial Ethiopian government, WHO, the United States Operation Mission in Ethiopia, and UNICEF collaborated to create our university as a Public Health College and Training Center (PHC & TC).

The PHC & TC rapidly became established as a pioneer center for public health practice, acting as a vital source of Ethiopia’s health professionals, dictated by the pressing health demands that existed in the 1940s and 1950s. It is still Ethiopia’s oldest medical training facility.

It was relaunched as a full-fledged university in 2004 as a result of the fast development of the higher education industry.

The University is a forerunner in the country’s transformational dynamics of the industry. Since its inception 60 years ago, the University has built a solid basis for serving the community by producing excellent graduates and providing services in health care, environmental protection and rural development, computational sciences and engineering.

Haramaya University, originally known as Alemaya University, was founded in 1954 on the initiative of Emperor Haile Selassie to modernize Ethiopian agriculture in particular and education in general via the development of an agricultural college and training. The institution was created at its current site according to the emperor’s request.

Oklahoma State University was given the authority to construct and run the institution until 1963. In terms of disciplines of study and infrastructure, the institution has grown dramatically in recent years.

Haramaya University is one of Ethiopia’s most notable and respected institutions. The University has educated a lot of people who have contributed to the world’s advancement and development. Professor Gebisa Ejeta is a recent example, having earned the World Food Prize, which many regard to be the Nobel Prize of agriculture.

The University has served as a knowledge repository for many other thinkers who have made it their goal to aid humanity and improve our planet.

As one of Ethiopia’s first and oldest institutions of higher learning, it seeks to be known nationally and worldwide for excellence in learning, teaching, research, and community participation. The university is not only an incredible location to spend wonderful student years, but it is also a place where students may develop intellectually and obtain a degree that is recognized by companies worldwide.

Arba Minch University is located in the southwestern region of Ethiopia. The University was created in 1986 as the Arba Minch Water Technology Institute (AWTI), and it continues to be regarded as a center of excellence for water technology in Eastern Africa.

The University was founded in June 2004 and offers undergraduate and graduate programs in the following academic areas: Arba Minch Institute of Technology, College of Agriculture, College of Business and Economics, College of Natural Sciences, College of Medicine and Health Sciences, and College of Social Sciences and Humanities.

Adama Science and Technology University has branches in Adama, Asella, and Debre Zeyit towns, as well as Addis Abeba (Winget campus). The institution was founded in 1993 as Nazareth Technical College (NTC) and was later called Nazareth College of Technical Teacher Education (NCTTE) until 2003, focusing on the training of technical teachers.

In 2006, the same institution was elevated to the status of university, becoming Adama University (AU). Five years later, the university renamed itself Adama Science and Technology University (ASTU).

Currently, the institution is split between two towns: Adama, which serves as the main campus, and Asella, which houses the School of Agriculture and the School of Health Sciences, respectively.

Beginning in 2011, the university began a new phase of development that is appropriate for the country’s setting. It has reformed its schools and is already in the process of establishing new institutions to supplement the current ones in order to improve educational quality.

The number of academic institutions has now reached seven schools, with a separate school formed to oversee all postgraduate programs.

The university has passed a Five-Year Strategic Plan and Senate Legislation that would help it realize its vision: ASTU strives to be Ethiopia’s first choice and one of Africa’s recognized institutions devoted to excellence in applied sciences and technology. In order for this goal to become a reality, the university community is trying to integrate the real world with academics.

Debre Markos Institution (DMU) is a public research university. DMU is located in a region blessed with favorable weather and vast natural resources, including the Choke Mountains water-shade, which encompasses six distinct agro-ecology zones within a 50 km (31 mi) radius and is the source of several tributaries to the Nile, and the Upper Blue Nile Gorge.

One thought on “Top 10 Best Universities in Ethiopia”