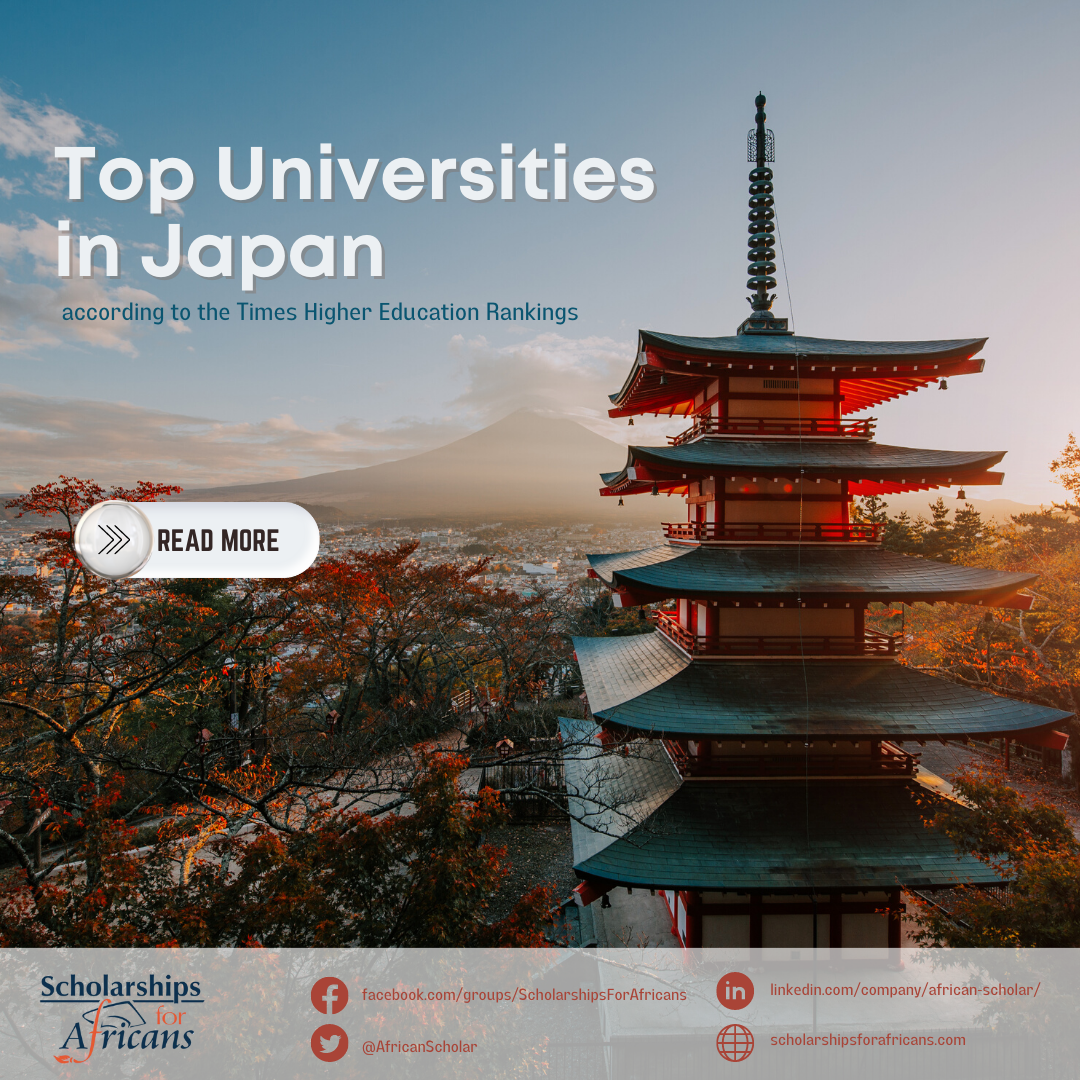 Looking to study in Japan? Scholarships for Africans lists down the best universities in the country that you might want to consider applying to.

The top universities in Japan, as indicated within this article, is based on the Times Higher Education’s university rankings. Institutions are ranked according to three main missions of university activity: research, teaching and impact.

Please be advised that Times Higher Education creates university rankings to assess university performance on the global stage and to provide a resource for readers to understand the different missions and successes of higher education institutions.

Why Study in Japan?

Aware that living and studying in Japan is expensive compared to many countries, the Japanese government has also introduced additional financial support for foreign students. Various university scholarships and grants are available through the Ministry of Education, Culture, Sports, Science and Technology (MEXT) and the Japan Student Services Organization (JASSO).

There are roughly 780 universities in Japan, 80 percent of which are private. There are also specialized schools and colleges that provide more vocational types of degree.

Founded in 1949, Hiroshima University is one of Japan’s top public universities. It currently has over 15,000 students. Out of this total population, more than 1,000 belong to foreign countries.

The University of Tsukuba is considered one of Japan’s leading comprehensive universities. It also takes pride in offering Japan’s first graduate-level evening courses for professionals in the areas of law and international business.

Three Nobel prize laureates have served either as president or faculty within the said university. Moreover, Tsukuba has been a forerunner in university reform in Japan. For example, our academic and research units were designed in such a way as to enable interdisciplinary research and education.

Kyushu University is one of Japan’s National Seven Universities. Now a recognized international university, Kyushu has 16 faculties, 11 undergraduate schools, and 18 graduate schools. It is home to nearly 19,000 students, from some 90 countries, with over 2,000 academic faculty.

The institution’s international appeal is underlined by its overseas branch offices in places such as San Jose in the United States and Cairo, Egypt.

Furthermore, Kyushu has partnerships with over 100 international universities involving study abroad programs for its undergraduate and postgraduate student body.

Despite its strong teaching ethic, Kyushu is also an active research institution with over 12 billion yen funded research from corporate partners and the government.

Also known as “Meidai”, Nagoya University has a particularly strong reputation for research in the sciences.

The university has nine faculties and 13 graduate schools, in addition to three research institutes and 18 research centers.

Six of the 13 Japanese Nobel Prize-winners within the 21st century spent time as members of faculty at Nagoya University. This shows Nagoya’s promise in terms of quality education and dedication towards academic excellence.

Hokkaido University is one of the seven Japanese national universities founded in 1876.

The institution is a world leader in various subjects ranging from social and natural sciences to humanities. In fact, in 2015, Reuters included the organization in the top 100 world’s most innovative universities.

Hokkaido operates in 34 faculties, which include law, medicine, and economics and business administration.

Its strongest research fields are chemistry, earth and ocean sciences, and material sciences. The institution’s facilities range from hospitals, childcare centers, gardens, and parks to experimental forests and parks.

Home to more than 15,000 undergraduates, 8,000 graduates, and 2,000 international students, Osaka University is spread across four campuses found in Suita, Toyonaka, Minoh, and Nakanoshima.

Kyoto University has earned a reputation of being one of the most accomplished research-oriented universities in Asia. This is credited to the institution’s unique approach to education and research.

Under their educational approach, Kyoto encourages the creativity and dialogue essential for groundbreaking research and discoveries.

It also invests in state-of-the-art laboratories and research facilities. In turn, these tools have enabled students and researchers alike to have the hands-on practical experience that is vital to their academic development.

3. The University of Tokyo

The Tokyo Institute of Technology is known to be a producer of scientists and engineers working at the frontiers of their fields.

Additionally, the institution is a reliable leader that aims to build a better future for the world through science and technology.

It prides itself on the quality of its research and comprehensive education, cultivating and fostering students with knowledge and expertise in multiple fields. This is done across its three undergraduate faculties, six graduate schools, and many research laboratories and centers.

Considered one of the most prestigious and oldest universities in Japan, Tohoku University has since been committed to ‘open doors’ policies.

The institution was the very first university in Japan to accept women, and the first to admit foreign students.

As part of its internationalized initiative and commitment to diversity, the university offers international degrees which are taught entirely in English.

As of 2015, there have been more than 1,500 international students at the university. The numbers represent 90 different countries and regions. In total, there are around 10,000 undergraduates, 4,000 master’s students and 2,600 doctoral students enrolled.