Join 2,513 other subscribers
Study in Europe 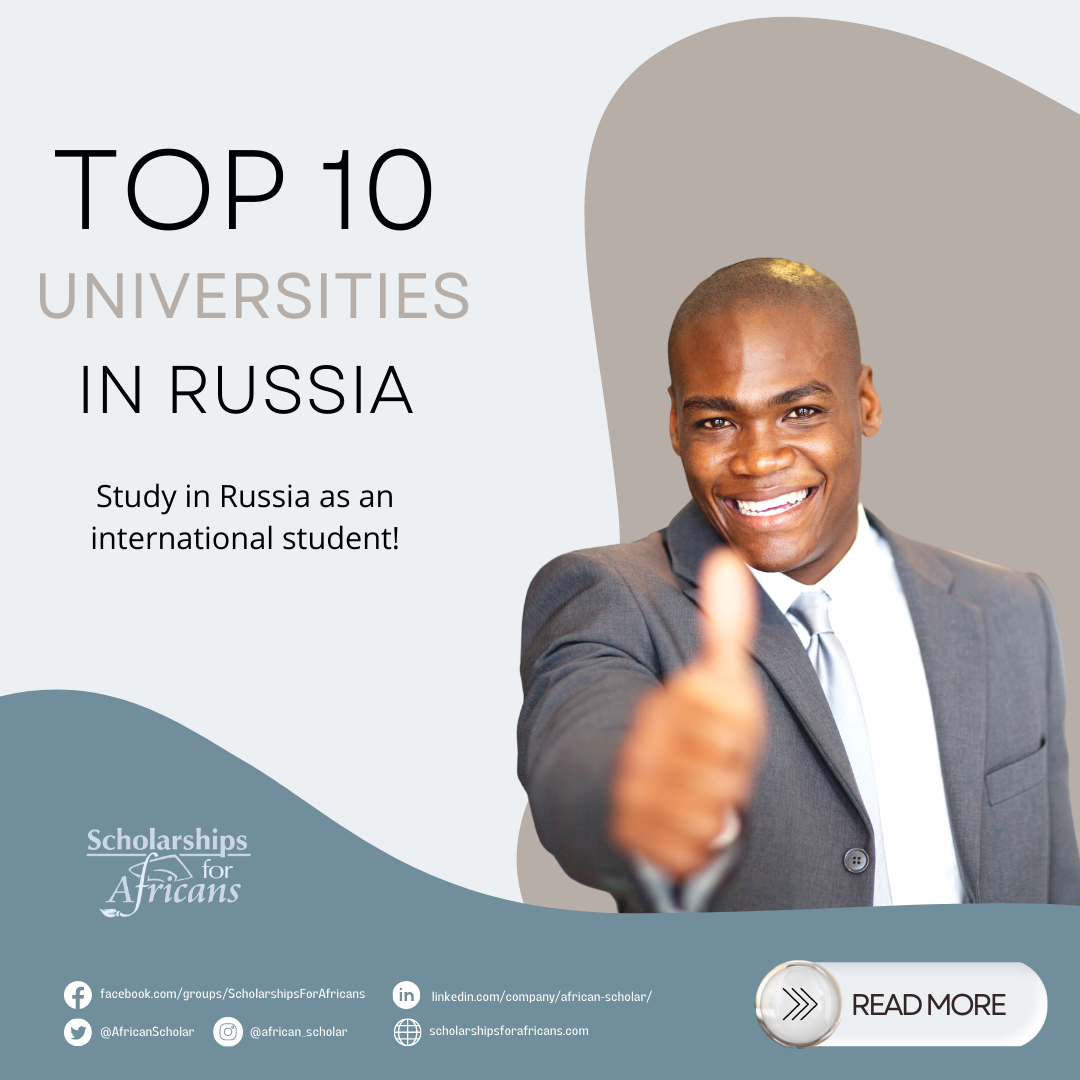 Interested in studying in the world’s largest and fastest expanding economy? The latest QS University Rankings: BRICS, a rating of the top 100 universities in the five BRICS nations, reveals Russia’s top universities.

Russian capital Moscow is a favorite destination for students because of its active and diverse nightlife, dynamic cultural scene, rich history, and apparently unlimited assortment of things to see and do. Affluent and luxurious, Moscow also has an underground culture, and the Kremlin’s distinctive red brick towers continue to draw tourists from all over the world.

Saint Petersburg, Russia’s second-largest city, has a more Western European atmosphere with its canals and Italian baroque buildings. New ideas, innovation, and cultural interaction have made it one of Russia’s most cosmopolitan cities.

Other major Russian student cities include Novosibirsk and Tomsk, each of which has one of Russia’s top ten universities:

Lomonosov Moscow State University is ranked first on the ranking of the best universities in Russia. It was founded in 1755 and is one of Russia’s oldest and largest universities, with over 40,000 undergraduate and postgraduate students.

The majority of the university’s faculties are located about five kilometers from Moscow’s city center on the Sparrow Hills, which overlook the Moskva River and are among the city’s highest points.

When comparing Russian universities to BRICS institutions as a whole, research remains a somewhat weaker field, both in terms of publication rate and influence.

Saint-Petersburg State University, which some claim is Russia’s oldest university, has its roots in the previous Saint Petersburg Academy of Sciences, which was formed in 1725. It is significantly smaller than Lomonosov Moscow State University, with little more than 32,000 students taught over 20 faculties.

However, it offers a remarkable array of cultural and athletic facilities as well as closeness to all of Saint Petersburg’s attractions. The school is located on the ancient yet contemporary Vasilyevsky island, which is connected by metro and tram lines.

Saint-Petersburg State University, ranked 14th in the first QS University Rankings: BRICS, has many of the same strengths and weaknesses as Lomonosov Moscow State University, scoring highest for faculty-student ratio, international reputation among academics and graduate employers, the proportion of staff with a PhD, and international student representation. Yet, research production and impact are somewhat weaker sectors.

Novosibirsk State University, founded in 1959, is a relatively new university. It’s around 20 kilometers outside of Novosibirsk, Russia’s third most populated city after Moscow and Saint Petersburg.

Its student body is very tiny when compared to the two universities mentioned above, and it provides courses in a wide range of areas, however, it is best recognized for focusing on sciences.

Novosibirsk State University is ranked 22nd in the BRICS findings, with the highest ratings for foreign student ratio and academic faculty to student ratio – both of which typically appear as strong points for Russia’s best institutions when considered in the context of the BRICS group as a whole.

‘Bauman MSTU,’ another of the country’s oldest and largest technical institutions, has about 20,000 students, including PhD candidates. It provides a diverse variety of engineering and applied science courses.

Bauman Moscow State Technical University, like other elite institutions in Russia, performs very well in terms of academic faculty to student ratio — in fact, it ranks fourth among BRICS universities on this metric.

According to QS’s main global polls, another noticeable strength is its reputation among graduate employers and academics. However, it does not rank as well as other major Russian institutes in terms of the proportion of personnel having a PhD or the international variety of its faculty.

The Moscow State Institute of International Relations (MGIMO-University), which was previously part of Moscow State University, became an autonomous university in 1944.

It has a relatively modest enrollment of roughly 6,000 students at the undergraduate and graduate levels, and as the name suggests, it focuses on humanities courses such as international diplomacy, journalism, and law, as well as teaching an astonishingly varied range of languages.

However, its most outstanding ratings are for the percentage of personnel with a PhD and foreign student enrollment – it ranks third and twelfth among BRICS universities on these parameters, respectively.

St. Petersburg State Polytechnical Institution, another reasonably large university, with little over 30,000 students enrolled in over 406 undergraduate and postgraduate programs.

It has a big campus in St. Petersburg and offers courses in a wide range of areas, with the greatest enrollments in engineering, economics, and management courses.

St. Petersburg State Polytechnical University, ranked 47th in the inaugural BRICS ranking, performs particularly well in terms of faculty-student ratio and percentage of staff certified to PhD level. It also compares highly with other BRICS institutions in terms of foreign student enrollment, albeit not so well in terms of international faculty recruitment.

Beginning as a school of economics in 1992, the National Research University – Higher School of Economics (HSE) has quickly acquired a solid reputation as a multi-field research university — both within Russia and internationally.

With a student body of nearly 20,000, its main site is in Moscow, but the institution also has campuses in St. Petersburg, Nizhniy Novgorod, and Perm.

HSE is ranked 50th in the first edition of the QS University Rankings: BRICS, with the best ratings for faculty-student ratio and staff with a PhD (15th and 31st respectively among BRICS universities).

In terms of foreign student enrollment, it trails behind other elite institutions in Russia, although it has already been quite successful in drawing global professors.

The Moscow Institute of Physics and Technology State University, often known as PhysTech, specializes in applied mathematics, physics, and related sciences and is frequently referred to as the “Russian MIT.”

Its main campus is in Dolgoprudny, a northern Moscow neighborhood, and it has a relatively small student population of slightly over 5,000.

Moscow Institute of Physics and Technology State University, ranked 55th in the first BRICS ranking results, joins other top universities in Russia in receiving a very strong score for faculty-student ratio, and also performs well in internationalization indicators, with high proportions of both overseas faculty and overseas students.

As for most Russian universities (there are some notable exceptions), its weakest points are the indicators for research papers published per faculty member, and research citations.

Tomsk State University, Siberian Russia’s first university, was founded in 1888. In the historic and student-centered town of Tomsk, it now boasts 23,000 students enrolled in 23 departments.

It has been designated as a National Research University, as have the most of Russia’s leading institutions, and it has some of the most comprehensive library archives in the country.

Tomsk State University is ranked 58th in the BRICS rankings, with the largest percentage of international professors among Russian institutions and 28th among BRICS universities overall.

It performs almost as well in terms of foreign student enrolment and the percentage of faculty having a PhD, but falls short in terms of research productivity and impact when compared to other BRICS universities.

The National Research Nuclear University (MEPHI), founded in 1942, is noted for its specialization in the nuclear industry and instruction in the subjects of physics, engineering, and mathematics. It’s in Moscow, near Kolomenskoye Park, which overlooks the Moskva River and is home to the royally owned “wooden palace.”

The National Research Nuclear University (MEPHI), ranked 65th in the first QS University Rankings: BRICS, is Russia’s leading light in the worldwide research community: it ranks first among all BRICS institutions in terms of the frequency with which its research articles are referenced.

Given the importance of its research, it’s probably surprising that it doesn’t rank higher in worldwide academic and employer polls (it’s just outside the BRICS top 100 in both cases). It, like other elite institutions in Russia, has a high faculty-to-student ratio and a high percentage of employees with a PhD.

One thought on “Top 10 Universities In Russia”