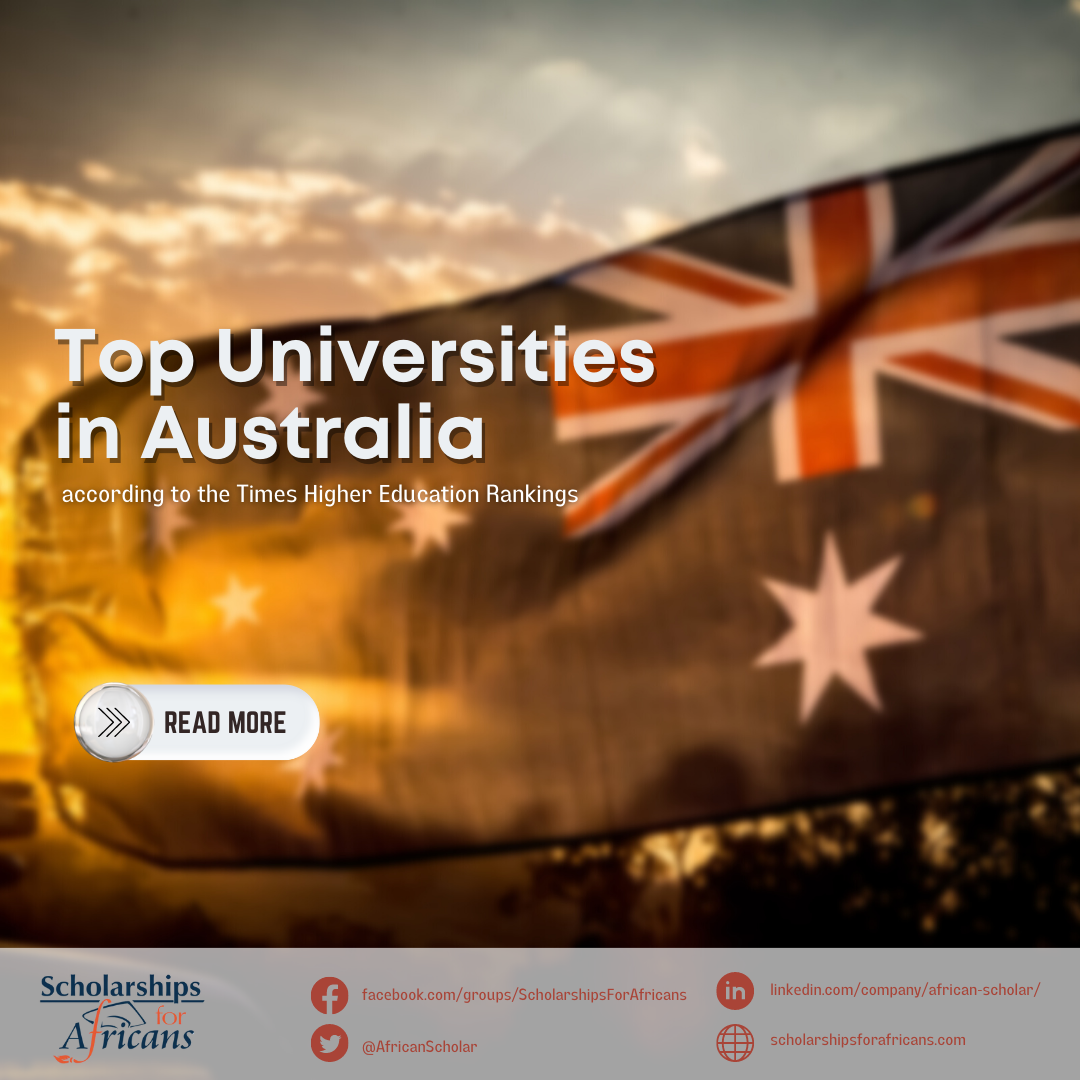 The top universities in Australia as per the most recent Times Higher Education rankings are listed in this Scholarships for Africans article. Check the institutions mentioned below!

Why Study in Australia?

Australia is considered among the safest study destinations for international students, alongside New Zealand and Canada.

In addition, it is currently the third most popular destination for international students behind the United States and the United Kingdom. Australia is beloved for its friendly natives, excellent education system, and cultural diversity.

If you’re looking to study in Australia, then you’re in luck because the country’s premier universities are spread across the country.

The Times Higher Education World University Rankings lists 37 top universities in Australia. Six of these esteemed institutions have made it to THE’s top 100.

For this article, Scholarships for Africans has decided to include only the top 5 premier Australian universities for international students. Feel free to check them out below and see whether there’s a fit for you.

Currently housing an estimated 46,000 students from 134 nations, the University of Sydney is known for its diverse educational programs. Almost 280 overseas exchange programs are in place in more than 30 countries.

In addition, the University of Sydney is also known for being the oldest university in Australia. The institution was founded on the principle of giving everyone the opportunity to realize their potential through education – and that belief persists just as strongly today.

The University of Sydney offers Australia’s broadest range of disciplines and its research focuses on finding solutions to society’s biggest challenges.

Monash University is one of Australia’s leading universities and ranks among the world’s top 100. It is also renowned for being the largest educational institution in Australia.

All Monash courses have an international focus, whether its students take subjects on global issues, participate in study abroad programs, or learn alongside students from diverse cultures.  Monash prepares them for the global workforce – so they can start their degree in Australia, and continue their studies in Italy, Malaysia, India, China, or any of Monash University’s 100 partner institutions worldwide.

In addition, Monash University is also a member of the prestigious Group of Eight – Australia’s leading universities.

3. The University of Queensland

The University of Queensland (UQ) has a strong focus on teaching excellence, has won more national teaching awards than any other Australian university.

12,000 out of its 40,000 enrolled students come from international backgrounds.  The university also has one of Australia’s largest PhD cohorts with about 13,800 postgraduate students registered.

The Australian National University (ANU) takes pride in having housed a total of six Nobel prize winners among its faculty and alumni. Currently, the institution is also being run by a Nobel laureate. ANU’s vice-chancellor, Brian Schmidt, won the 2011 Nobel Prize in Physics (with Saul Perlmutter and Adam Riess) for providing evidence that the expansion of the universe is accelerating.

The University of Melbourne is the second oldest Australian university. Over 30,000 international students from 130 countries have found a home in this global institution.

Degrees at the University of Melbourne stand out for being modeled from top institutions overseas. Students spend a year exploring a range of subject areas before choosing a major. They also study subjects outside as well as inside their chosen discipline, giving Melbourne students a breadth of knowledge that sets them apart.

In addition to over 200 affiliated clubs and societies, the university has 10 residential colleges where most students live, which provide a quick way to build an academic and social network. Each college provides sporting and cultural programs to enrich the academic experience, which is at the center of university life.

One thought on “Top Universities in Australia – Times Higher Education”